<![CDATA[What is it about the hood and crime? On second thought, don't answer that.

Still though, it’s getting to the point where the educated are outnumbered by gangstas and wannabes. And by the way, don’t think that just by becoming a successful pro athlete, and keeping a clean profile (hard to do these days) that trouble won’t find you where you live. 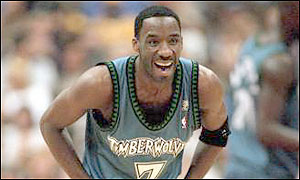 Consider the story of Terrell Brandon, former NBA point guard, who lives in his hometown of Portland. He was just recently the victim of an extortion attempt. Remember that ridiculous spam I read to you? Well this was just like that, only not as funny. Good thing dude got caught, though. Kinda sad really… TB and his homie set a trap for him, and dude fell right for it. Okay, so I guess it is kinda funny after all. Still messed up, though. My people! Not that I would endorse this, but should you decide that you could become a better titan of crime, it’s best to learn by observation. Which is exactly what Sudhir Venkatesh did when he, as a fresh-faced grad student at the U of Chicago, accidentally befriended a high-level gang mogul. Little did either of them know that it would be the start of a long, fruitful relationship, culminating in Venkatesh’ sociology memoir Gang Leader for a Day. I perused it for a few hours at Powell’s a couple nights ago. The best part so far is in the beginning, when, at gunpoint, he begins to survey his foot-soldier captors in the middle of a urine-soaked stairwell, asking them: “how does it feel to be black and poor? Very uncomfortable, somewhat uncomfortable, neither uncomfortable nor comfortable…” Of course, I do take some small solace in the fact that people in other parts of the world have the propensity to act equally bad. I’m thinking of a duo of looting young women in Belgrade, who were captured on YouTube during a riot in the Serbian capital. The video is entitled (English translation), “Swapping Kosovo for a pair of sneakers.”

Basically, you have people rioting over the terrible political situation, and these ladies are trying to grab designers shoes and handbags.

I’m guessing this would be the cultural equivalent of the hoodrats who looted South Central after the Rodney King verdict. More proof that ghetto behavior is a worldwide phenomenon. I don’t know if these ladies were prosecuted or not, but their behavior being broadcast for all the world to see was, I’m sure, punishment enough. ]]>