You know, with such an inflated post title, one familiar with my writing style would think that this would be an 8,000 word sprawling behemoth of an essay, whereby I systematically explain in meticulous detail the failings of the ethical and moral compass in today’s vanguard of popular culture, a region of artistic real estate most commonly held by video games.

But I don’t have time for all of that, because I have a life.

On the off chance, however, that this is a subject that you find yourself drawn to, then I implore you, first check out this piece on sex, violence and video games by blogger Mitch Krpata. His blog Insult Swordfighting is a great place to gather both intel and insight on the latest video games, but more importantly, it’s a great primer on the recent (and not-so-recent) history of video game controversy, specifically as it relates to sex and violence.

Because then you’ll be able to digest what I’m about to say.

Grand Theft Auto IV, the latest in the celebrated series of Rockstar Games’ gritty-underworld-of-crime titles, is looking like one of the coolest things ever to hit the shelves in years. The hype machine is cranking like crazy, and for good reason.

Released today, the latest GTA entry sits at the top of the wish list for many adult gamers looking to immerse themselves in the realistic (albeit fictional) portrayal of New York’s criminal element. And, as I’ve been told, GTA IV expands upon its trademark, open-ended gameplay with an even larger myriad of missions and characters. It appears to have most of what I tend to look for in a video game title: eye-popping visuals, an intuitive yet powerful gameplay mechanic, and an intriguing storyline (an eastern European immigrant finds himself disillusioned with America as he provides the muscle to protect his cousin’s undeground business).

Nevertheless, I just can’t bring myself to play it.

The biggest reason, of course, is that I’ve already spent most of my “fun stuff” budget money on other video game titles and other forms of recreation. But even if I had $60 ready to burn a hole in my pocket, I would much rather stick it under the mattress and hope it hasn’t already run away by the time Splinter Cell: Conviction is released.

For a couple reasons, actually.

The first is actually a little vain and pretentious, but I’m just gonna put it out there. I’ve been generally against the GTA series from the beginning, and relinquishing my moral high ground on the basis of what is admittedly a very cool game would make me look like a hypocritical John Kerry flip-flopper. And I do not desire to be swift-boated into submission.

More substantially, though, there’s a slippery slope when it comes to video game characters and their ethical gray areas. Regardless of how much Rockstar president and GTAIV writer Dan Houser wants to endow his protagonist Niko Bellic with a sense of gravitas and inner conflict over his criminal actions, it’s all still too morally relativistic for my taste.

Or more simply put, doing bad things for a good reason cannot, over time, make you a good person.

This truth was hammered home to me, as I watched episode nine of this season of Lost (season 4). 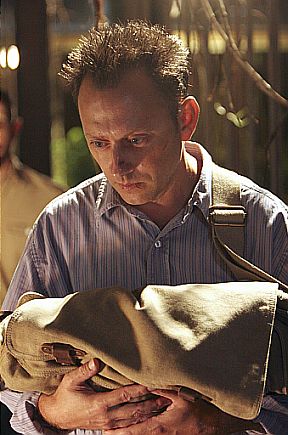 I won’t reveal any spoilers here, except to say that by this point in the dramatic arc, many of the character polarities have become reversed. Several people that we were conditioned to think of as “bad guys” earlier on in the series have now been fully examined in a more sympathetic light. Conversely, several other characters who were seen as paragons of virtue have veered off course by the commission of many morally repugnant acts, including murder.

Lost is a very popular show, in part because of its refusal to cast its characters into stock TV archetypes. Most characters are three-dimensional, with conflicts and inner motivations and crises of belief and difficult choices to make.

Lauding this show might also also look hypocritical, especially in light of how I’ve also previously praised the Splinter Cell franchise. So I’m going to beat my critics to the punch. What’s the difference between the moral relativism in Lost and Splinter Cell as compared to Grand Theft Auto?

Well, I think it boils down to the “sandbox” style of open-ended gameplay. Many GTA fans love the series precisely because it combines a sense of weaponized and vehicular aggression with total autonomy. Each Grand Theft Auto universe is a detailed, fully rendered world where violence and mayhem can commence without much in the way of repercussion. Sure, doing some dirt is going to increase the heat from the police, but in this hyper-masculine environment there appears to be no accompanying ethical weight to your actions other than getting caught. There are no funerals, no shots of grieving mothers, no diseases contracted from prostitutes, not even a reprimand from other mob bosses for mixing it up with innocent bystanders. With GTA, there are no innocent bystanders. Anyone and anything is fair play.

And within certain limited contexts, I don’t so much mind that. I love a good cops-and-robbers style chase as much as the next guy, which is why I’ve been such a fan of the Need for Speed series, especially NFS: Most Wanted and its sequel NFS: Carbon. These games are all about illegal street racing, and they provide plenty of wish-fulfillment for armchair wheel-jockeys who resent speed limits and law enforcement. But at the end of the day, all the trouble you’re causing is damage to other cars and property. No one is shown being killed, even if the manner of racing
would, in real life, result in vehicular homicide charges.

This manner of fantasy is, in my book at least, mostly harmless.

But the way in which most of the GTA fanboys rave about its open-ended style is indicative of how much they dig the fact that they can pretty much ignore the plot and just run amok in their own stylized playground of guns and vehicles, where nothing is sacred or out-of-bounds.

I take issue with that, because some things are sacred, and some things should be out of bounds. Generally speaking, I think Bungie gets that with its Halo trilogy. I think BioWare gets that (mostly) with Mass Effect. And I think EA wants to look like it gets that, although the fact that they’ve been trying to initiate a hostile takover with Rockstar makes me think otherwise. (As Dennis McCauley points out, there are other reasons to be against the EA-Take Two buyout; the GTA morality tack is just one of many.)

So if you’re a GTA fan and you think I’m wrong, I’m open to discussion about it. Please don’t think I’m some Jack Thompson clone who is only out to generate publicity by trashing the latest hit. I honestly do want to play GTA IV… it’s just that there’s this other nagging voice besides the irritable Jack Thompson.

I’m Jelani Greenidge, and thanks for mixin’ it up with me. ]]>