<![CDATA[In addition to being a worship leader, I am also building a small business. I would tell you more about it or link to it, but I’m not ready to do that yet. It will suffice to say that in the coming months and years you’ll be reading more about Nqosi Communications in this space.

As it is, though, not having grown up with a lot of good business mentors and role models, I’m having to seek out good counsel for myself. A good friend of mine that I went to school with in Chicago just happens to have a few little side businesses for himself, and he often counsels people in my position, just starting out and needing a little direction and guidance. Not long ago, during a lets-catch-up-how-are-you conversation, he mentioned this to me. I had to swallow my pride and admit to needing his help, so that’s what he does for me now. (Another example of how college is just as — if not more — valuable for the relationships than for the book learning.) 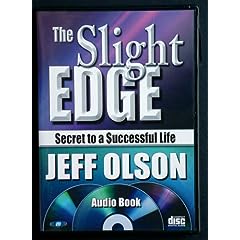 Anyway, he recently recommended to me two books, one of which I am reading now, called The Slight Edge. This book is excellent… it’s a philosophy book that can help you stay on the path to success. The main principle is that success is the result of a series of simple, mundane choices repeated consistently over time. This is the slight edge that makes the difference.

I probably will not agree with everything this book has to say, but I’m halfway through and the author Jeff Olson is batting a thousand in my brain. Every new paragraphy and chapter, it’s like yeah… I’ve never thought about it that way… this is my life we’re talking about.

As you can tell, I’m excited about this book. So kudos to Chris for that.

The other book he recommended, though, I was not so excited about.

He recommended The Secret.

As a believer in Christ, I know enough about this book to know that a lot of what Rhonda Byrne and her new age compatriots have to say is bunk. And if I didn’t already suspect this from the overflowing amount of media coverage the book has gotten, I would’ve been convinced when the scary lady trying to sell me a time-share alluded to it.

However, I’m sure there will be some kernels of truth inside The Secret, so it’s my challenge to find them. As Proverbs 18:15 says, “the heart of the discerning acquires knowledge; the ears of the wise seek it out.”

In this way, I’m torn. Besides the fact that I don’t want to expose myself to lies, I also don’t want to fund the empire of The Secret by buying the book or video. Even buying it used would help them, because it will encourage the reseller to buy more copies to turn around.

But I also believe in finding truth where it is to be found.

He’s now under fire for allowing his players to erect a shrine in the clubhouse consistenting of two naked female blow-up dolls surrounded by wooden (phallic?) bats. It was all an effort to break a hitting slump.

Chicago Sun-Times columnist Carol Slezak joined the chorus of those denouncing Guillen for not having the sense to know that the prank was blatantly sexist and inappropriate for a work environment where female reporters may be working. Even his own boss, general manager Kenny Williams, was quoted as saying:

“And I don’t view this as a boys-being-boys type issue. This is, you know, boys being a little bit careless, a little bit irresponsible on this front.”

Guillen is sticking to his tune, which is that there is nothing wrong with what happened, and that anyone who is offended is looking for something to be offended about. Which, any way you slice it, is baloney. (Not to be confused with bologna, which is really good fried.)

However, his corollary argument is, essentially, that the clubhouse is a private place and what happens inside should be, on balance, kept private.

This is an idea that I agree with, actually. Which is why, had they unveiled the blow-up dolls, had a few laughs for five minutes and then put the whole thing away before anyone else could come in and see it, it probably wouldn’t have been news.

Professional athletes spend a majority of their time during the season under tremendous scrutiny, so it’s part of the manager’s job to protect his players, and by extension, the sanctity of their clubhouse. This is a truth that many reporters and fans do not understand, which is why it is sort of admirable, in a backwards, quixotic sort of way, that Guillen has defended his players so adamantly.

He’s still wrong, of course, and had his 2005 White Sox team not won the World Series, he would have been fired long ago for this and other blow-ups (pun intended).

The larger point I’m making, though, is that part of developing wisdom is find the good parts that are surrounded by the rubbish, like a beautiful gold ring in the snout of a pig. Hopefully I’m on my way to mastering that art. I’m pretty sure it’s going to take awhile.

But if I find out the secret, I’ll let you know.