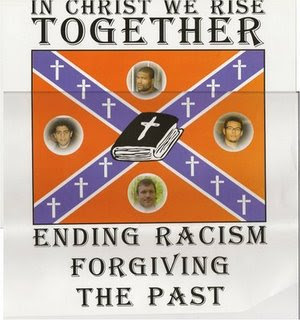 … by shadowy organization of neo-reconciliatory Christians.

That’s just the term that I’ve given to the four guys pictured on the poster that was seen mysteriously taped to the sign of my church (and to the wall of one of our buildings).

On the one hand, I agree with the overall sentiment of the poster. As Christians, we believe that our identity in Christ is the ultimate common denominator, and that by first being reconciled to God, we can minister grace and be reconciled to each other, and then extend that grace out to a world in desperate need of it.

On the other hand… the iconography of the sign is deliberately provocative, which is great if you’re the type of organization that is seeking out controversy, but most churches are not in that category because, sadly, controversy usually does not put butts in seats. (As a matter of fact, it usually removes them.)

Which is why my fear with those signs, the reason why I removed them, is that I wouldn’t want anyone to be confused. If all you see are the “stars and bars” design and you don’t read the words, it looks like white supremacist propaganda. And I don’t trust many churchgoers to be discerning enough to give it a thorough enough look to understand the meaning. I do, however, trust many of them to go flying off the handle and start complaining, loudly, to anyone within the vicinity. And that, our church does not need more of.

So they came down.

Who did post this? Are there any more at other churches in our neighborhood? Are these four guys pictured even involved, or were they just victims of a rogue Photoshop session? And what was this poster supposed to accomplish? Was it just to stir up some thought and discussion among those of us who think there is no race issue in the church or in America? And considering everything that’s gone on with this presidential campaign, is there anyone left who still thinks this is not an issue?

As Arsenio used to say, these are things that make you go ‘hmm.’