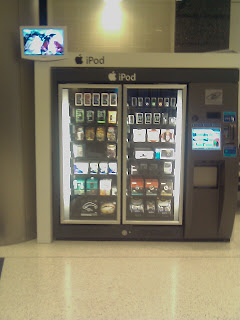 I’m not the type of cat to throw stones at an innovative company like Apple, Inc.

(Even though I don’t have a problem with laughing with others who do.)

As a Windows man, I have a healthy amount of respect for Apple’s slick, easy-to-use products — many of which (including the ubiquitous iPhone and all the iterations of the iPod) have achieved significant market penetration for Apple, if not outright domination.

But I do believe there can be too much of a good thing, and I saw it with my own eyes during a layover in the Houston airport recently – when I walked past an iPod vending machine. 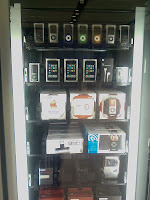 It’s always been my understanding that vending machines depend primarily on foot traffic. So in this economy, it seems like a major stretch to expect Charlie and Cathy Consumer to shell out several hundred dollars on an impulse purchase, even one as popular as an iPhone or an iPod.

Yet, there it was, in the middle of the concourse.

So I guess that must be what the brain trust at Apple is banking on. Either that, or they’re just expecting spontaneous brand conversions, as consumers cave to the massive waves of peer pressure that result from such market domination.

Or maybe this is just one big ego boost.

Screw it, I’m Steve Jobs, and I say we sell iPods in vending machines. Don’t give me figures, lets MAKE THIS HAPPEN.

I enjoy seeing that kind of moxie when it’s depicted as comedy – like the fictional Gillette exec in this great archived piece from The Onion (WARNING R-rated language).

But in real life, it’s not as funny. I hope nobody loses their shirt over this, because as far as I know, they’re not selling those in vending machines yet. ]]>