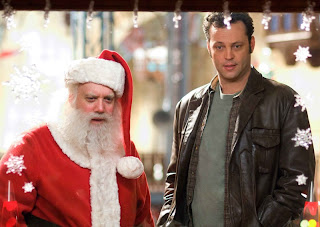 So I gave into a small guilty pleasure tonight.

I watched the movie on the airplane.

Usually if I’m watching a movie on an airplane, it’s something I’ve brought myself for that express purpose, and I’m watching it on my computer. I normally can’t stand watching the movies that the airlines play, because I hate craning my neck, staring at that tiny little screen, and listening to the terrible audio.

But I made an exception, and I’m glad I did, because I enjoyed it pretty thoroughly — more evidence that a fun story with compelling characters can cover a multitude of shortcomings. If a film’s characters are cardboard cutouts and the story does nothing interesting, then it can be showing on an IMAX screen ten times a day, for free, and I’ll still probably avoid it like the plague.

My guilty pleasure was last year’s Fred Claus, starring Vince Vaughn (The Break-Up, Dodgeball) and Paul Giamatti (Sideways, The Negotiator). Like many interesting pictures, Fred Claus is a mashup of three time-worn story archetypes, the wholesome holiday fairy tale, the fish-out-of-water tale, and the slacker-does-something-good-for-once story.

The heart and soul of the movie comes from the bond of two brothers – Nicholas (a.k.a. Santa Claus) and his maladjusted younger sibling Fred, frustrated and misunderstood after living in the shadow of his jolly, charismatic older brother.

I had relatively low expectations for this film, but found myself being pleasantly surprised over and over. Some of this was Vince Vaughn’s patented blend of abrasive charm. Despite maintaining the grounded, smart-alecky style of delivery that made him a star in the first place, many of Vaughn’s lines as Fred sound downright conservative. This is what makes Fred such a sympathetic character, because even though Fred doesn’t always make the best decisions, his heart is always in the right place – like when he lectures a young girl who attacks him for repossessing her family TV. That scene is golden.

Mostly, though, it was the interesting family dynamics that really pulled me in. In a sense, Fred Claus is like many holiday films based around families (The Family Stone, Dan in Real Life, This Christmas), except that the deftly-cast family involved just happens to belong to good ol’ Saint Nick.

As such, the movie has a winning way about it, because it manages to depict a well-known — but normally boring — character as a three dimensional figure. Sure, he’s Santa Claus, but first he’s a regular guy, who has regular guy issues. He struggles with enforcing his boundaries. He’s got weight issues. He has to deal with tension between his wife and his mother.

Most distressing is the pressure he receives from a joyless suit (Kevin Spacey) intent on cracking down on inefficiency at Santa’s workshop. This is the first movie I’ve ever seen that manages to make Santa Claus seem not only human, but downright vulnerable.

Fred Claus is not without its issues, of course. It still maintains many common Christmas movie clichés, including wrapping up every conflict way too neatly — gift-wrapped and bow-tied for the convenience of screenwriter and viewer alike. And for those who suffer from acute saccharine intolerance, there are a few scenes that will prompt bouts of eye-rolling and plenty of oh-please-give-me-a-break.

But staving off the overdose is a nice combination of levity and gravitas. Two of my favorite scenes have good amounts of both.

There’s a scene where Nick confronts his brother and the confrontation goes downhill, first into name-calling, and then into a full-on brawl. And then later there’s a scene where Fred visits a support group for siblings of famous people. (Cameos aplenty here.) In both scenes, the humor is undergirded by the simmering tension of decades worth of unresolved issues between the two brothers.

As Christian, I have to learn how to extract the laudable and virtuous elements from the other aspects that might not be in line with my standards or worldview – otherwise, I just wouldn’t watch any movies at all. Fred Claus is no exception. The main message is that troubled kids are just as deserving of love and attention as nice kids, and this is a great message that I wholeheartedly endorse. That this message is saddled with the baggage of ambiguously relativistic morals is unfortunate, and occasionally annoying.

Key example: the film’s shining reunion between Fred and his love interest [ANOTHER SPOILER] culminates in him magnanimously announcing that he’s moving into her apartment and they’ll be living together. The scene is written, shot and edited as a climactic, romantic proposal. His proposal, though, is mere cohabitation.

On the plus side, though, there is no profanity whatsoever, and very little crass humor. (One suggestively-costumed, cleavage-showing woman, and one fleeting reference to marital sexuality.)

That, combined with the powerful relationship between two adult brothers, makes Fred Claus more than worth the price of a rental. It might actually be the rare holiday film that is, dare I say, rewatchable.

Just make sure you don’t let any of those Santa-themed Christmas songs get stuck in your head. Those things are brutal. ]]>