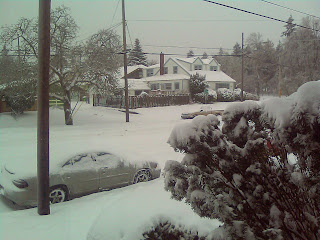 (My apologies to a commenter at Eugene Cho’s Beauty and Depravity, from whom I so judiciously ganked the term “snowpacalypse” … considering all the hysterics from Seattlites and Portlanders who aren’t used to a ton of snow, it just seemed perfect.)

First, I offer a passage from the latest edition of Experiencing God, a Bible study that I have recently embarked upon:

Don’t Just Do Something

We are a doing people. We always want to be doing something. Every now and then someone will exclaim, “Don’t just stand there; do something!”

In contrast, I think God is crying out to us, “Don’t just do something. Stand there! Enter a love relationship with Me. Get to know Me. Adjust your life to Me. let Me love you and reveal Myself through you to a watching world.” A time will come when doing will be called for, but we cannot skip the relationship. The relationship with God must come first.

Truer words have never been spoken or read, especially for me in this time.

Most of my heroes in the faith are men of action, people who identified injustice and were led by God to do something about it. People like my friend Kevin Bruursema, whose heart for God is the engine that turns his holy motor. (As an aside, doesn’t Holy Motor sound like a Christian metal band?)

I am reminded, by this Henry Blackaby passage, that action is always a byproduct of, rather than an avenue toward, relationship with God. And this truth has been made real to me in a very practical way.

Today is the eighth straight day of snow and subfreezing temperatures in the Portland area. I am not unfamiliar with such weather after spending eight years in Chicago, but this kind of heavy snowfall almost never happens in the urban centers of the Pacific Northwest.

This time of year, most of the conversation I have about weather usually consists of bragging about how people here don’t know how to operate in snow, how after an inch or two the whole city shuts down.

Only this time it’s not an exaggeration. After almost a foot of snow in the last 24 hours, the city really has shut down. And the most visceral part of that shutdown was that yesterday morning, we canceled church.

Yes, we canceled church. And we weren’t the only ones. Most of the churches in the area canceled service.

On a normal week that would actually be a relief for me, but this week it was particularly sad. See, yesterday was supposed to have been our big Christmas service. We had all kinds of special music planned, and a little pageant for the kids. It was going to be the highlight of the season.

Only, it never happened.

Yesterday, during a time of pensive contemplation, Holly mused that maybe this was God’s way of telling us we all need to slow down. Maybe He’s trying to humble us. She thought of James 4:13-15 (rendered by Eugene Peterson’s The Message):

And now I have a word for you who brashly announce, “Today—at the latest, tomorrow—we’re off to such and such a city for the year. We’re going to start a business and make a lot of money.” You don’t know the first thing about tomorrow. You’re nothing but a wisp of fog, catching a brief bit of sun before disappearing. Instead, make it a habit to say, “If the Master wills it and we’re still alive, we’ll do this or that.”

Even though service was canceled, I headed down to the church anyway, because I’m sorta stubborn like that, and I wanted to be there to greet anyone who didn’t get the word of our cancellation and trekked out in the snow anyway.

(Plus I wanted to have fun doing doughnuts in the church parking lot.)

While I was there, I had a lot of time to think.

So much of what I’ve been trying to do for God has been so fruitless. My motive has been good, but I’ve just gotten into the habit of hunkering down, squaring my shoulders, and soldiering on in the work of the Lord. Preparing music, scheduling rehearsals, sending emails, making phone calls, following through on action items, et cetera, et cetera.

As our church has gone through so much drama and decline, I think I was partially motivated by the desire to provide a seasonal respite from the neverending church drama. No matter how bad it gets for our church, went my thinking, the least we can do is do Christmas right.

But in the end, my specially-arranged Christmas music (including a hip-hop rendition of “Hark the Herald Angels Sing”) was no match for a foot of snow blanketing the metro area. Apparently, God had other plans.

One of the best things about twelve inches of snow (and still falling!) is that the monumental effort required to go anywhere provides a disincentive for running errands and scurrying about. Weather like this beckons us to just sit, and be calm, be thankful, behold the beauty… to just be.

This, I am stubbornly and painfully learning, is where God wants me right now.

So despite my pride at finally putting chains on my Pontiac for the first time, I will resist the urge to go out just because I’m not afraid of driving in the snow. I will be satisfied with loving my wife and taking some time for introspection. I will learn my lesson and be grateful for the humbling experiences God has blessed me with.

I will sit and be.

And I will experience God in the process.

I’m Jelani Greenidge, and thanks for Mixin’ It Up with me.
]]>